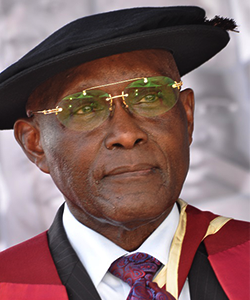 African Union for Science and Technology.

He obtained his doctorate from the University of London, and was appointed a Visiting Fellow at Wolfson College, Oxford University. In addition to being a Fellow of the Ghana Academy of Arts and Sciences, he is a Foreign Fellow of the India National Sciences Academy, Fellow of TWAS Academy of Sciences for the Developing World, Founding Fellow of the African Academy of Sciences and Fellow of the New York Academy of Sciences. As a prolific writer and photographer, Prof. Ayensu has authored many books and published numerous scientific and technical monographs and papers. Some of his notable books include Medicinal Plants of West Africa (1978); medicinal Plants of the West Indies (1981); Medicinal Plants of China (1985); Ashanti Gold: The Legacy of the World’s Most Precious Metal (1997); HIV/AIDS: Knowledge Protects (2001); Science, Technology and Society (2006); Bank of Ghana @ 50: Commemoration of the Golden Jubilee (2007); Lake of Life – a commemorative volume depicting the Volta River Authority’s 50th Anniversary (2013); Field Guide to the Volta Basin (2013).