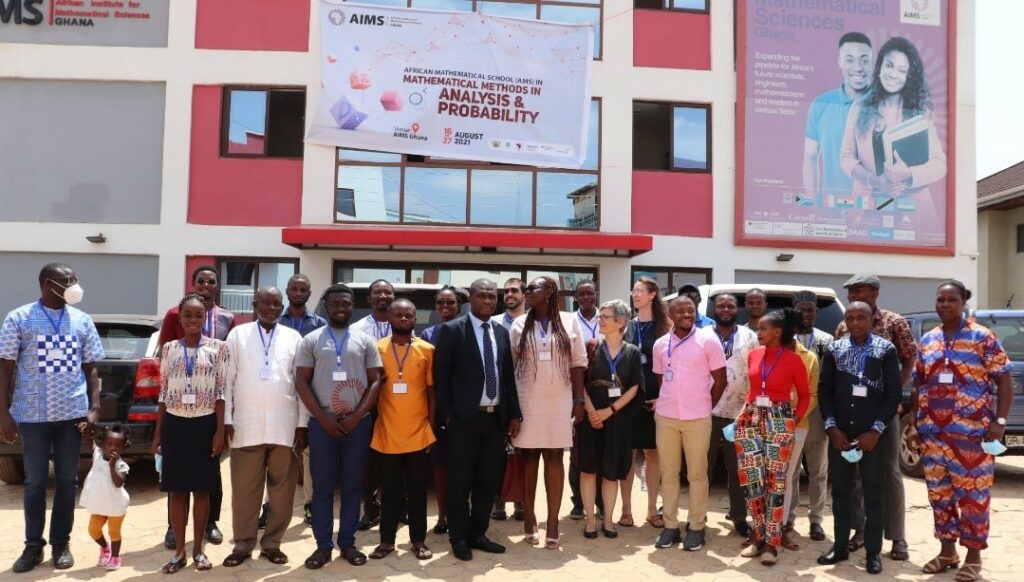 Scientific writing that leads to publication is the reward of every researcher. However, the process involved can be challenging, to the extent that researchers may want to seek fresh ideas from others to overcome draining setbacks. This reason underpins the organisation of most research convenings like the recently ended African Mathematical School in Mathematical Methods in Analysis and Probability (AMS2MAP).

This summer school, organised at the AIMS Ghana Centre from the 16th to the 27th of August 2021, saw 35 researchers from universities across Africa meeting to share ideas and learn from the over ten lecturers who showed up from around the world. It also served as a platform for networking, interaction, and exposure to cutting-edge research with the latest mathematical tools.

These courses were delivered in a hybrid fashion, with some lecturers and participants joining virtually in response to COVID-19 protocols.

At the opening ceremony, Prof. Olivier Menoukeu Pamen, the German Research Chair in Mathematics and its Applications at AIMS Ghana, lamented the low level of research emanating from Africa and advocated for African governments to allocate more funding towards research.

Prof. Pamen, who also served as the lead organiser of the school, mentioned that Africa produces only 2.5 percent of global research output, with West Africa contributing less than 0.08%.

The AIMS-Carnegie Research Chair in Data Science at Quantum Leap Africa, AIMS Rwanda – Prof. Franca Hoffmann called for more exchange programs between researchers in Africa and the global research community to share ideas and experiences on the latest scientific research models. Prof. Hoffman, who also served as an organiser, advocated the need for brain circulation instead of brain drain.

The Technical Advisor and Director in charge of Tertiary Education at the Ministry of Education – Dr. Eric Nkansah, represented the Government of Ghana at the opening event. Speaking to the concerns of the program lead, he announced the government’s intention to dedicate a minimum of one percent of the country’s Gross Domestic Product (GDP) to supporting research, science, technology, and innovative activities. To that end, measures were being put in place to establish a National Research Fund, to be made accessible to researchers and all potential innovators. He added that the Fund Bill was passed by parliament, and the government was working on a regulatory framework for operationalising the fund.

He re-affirmed the government’s unalloyed commitment towards promoting and advancing the study of Science, Technology, Engineering, and Mathematics (STEM) from the primary schools to the tertiary level. He further expressed the government’s ambition to partner with AIMS Ghana – a Centre of Excellence for postgraduate training in mathematical sciences and research- towards training between 50 and 100 PhDs in the next five years.

Before closing the AMS school session, the Ph.D. students participated in the globally accepted 3-Minutes-Thesis (3MT) presentation challenge. Mathematicians and non-mathematicians alike were invited to support and serve as judges. The judging criteria was based on content, comprehension, and engagement. In the end, Elizabeth Dadzie of the AIMS Ghana Research Centre emerged as the winner.

From her presentation, she exhibited her passion for supporting the Agricultural sector using Mathematics. Through her research, she aims at getting farmers in Ghana some mutual insurance they can rely on, considering the seasonal nature of planting across Africa. Hetsron Legrace Nyandjo Bamen and Maalvladedon Ganet Somé both occupied the second position in a draw. Donatien Wilfried-Kuissi Kamdem won by popular vote however his presentation went beyond the 3-minute time frame.

The organisers issued participation certificates to all participants, winners, and presenters of the 3MT. Participants expressed their profound gratitude to the school’s organisers and funders for significantly impacting their academic/research careers.