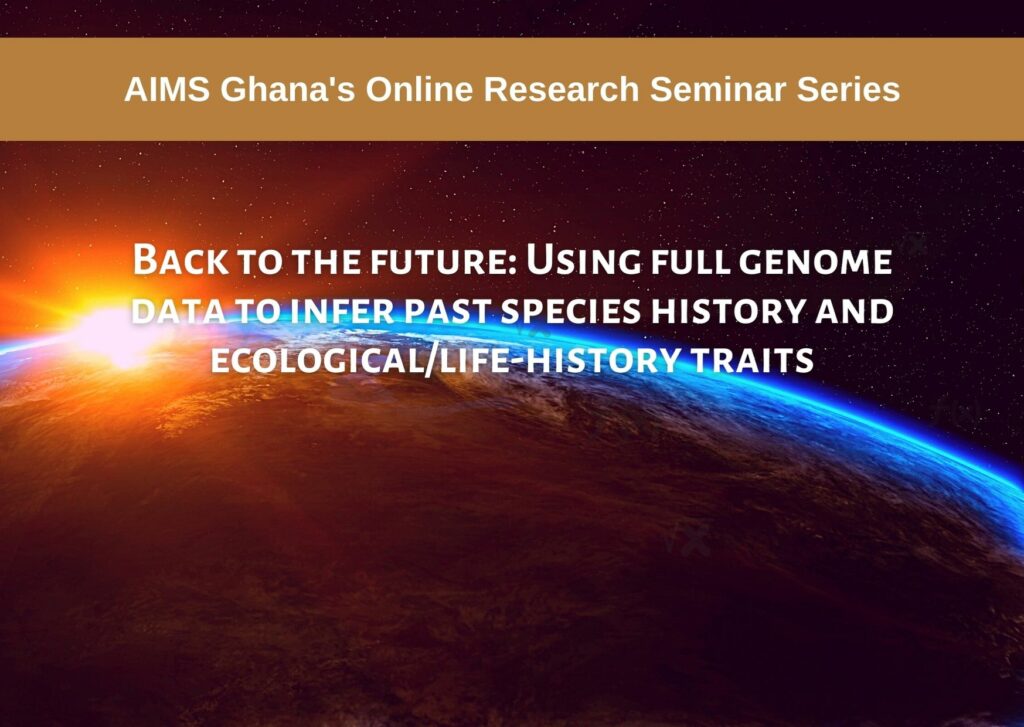 Back to the future: Using full genome data to infer past species history and ecological/life-history traits

Abstract:  The field of evolutionary genetics is profoundly rooted in stochastic mathematical theory and since several years the theory has been extended to model the evolution of full genomes. Indeed, large amounts of full genome data are becoming available for human but also non-model organisms. Two main mathematical models are used: forward in time diffusion equations and backward in time coalescent. Several methods have been developed to use sequence data to uncover population demographic history. While these methods can be applied in principle to all possible species, they have been developed based on the human biological characteristics and have main limitations such as assuming sexual reproduction and no overlap of generations. However, in many plants, invertebrates, bacteria, fungi and other taxa, these assumptions are often violated due to different ecological and life history traits, such as self-fertilization, long term dormant structures (seed or egg-banking) or large variance in offspring production. In this talk I will focus on the effect of dormant structures (seed banks) on genome evolution. I will first describe few analytical results based on a diffusion model of seed banks, and second a novel Hidden Markov Model (HMM) inference method based on the Sequential Markov Coalescent which we developed to infer 1) the rates of seed/egg-bank, and 2) the populations’ past demographic history. We apply our method to Arabidopsis thaliana, Daphnia pulex and to detect seed banking in different populations of the wild tomato species Solanum chilense. If time permits I will show some extensions of this method taking into account epigenetics data and inferring changes of selfing/dormancy in time.

Short biography of Speaker:Aurélien Tellier is a theoretical evolutionary biologist and assumed, since June 2012, the position of associate professor of population genetics at the Technical University of Munich. Aurélien’s area of research is to develop population genetics theoretical models to comprehend genome evolution at the population or species level, aiming to bridge evolutionary and ecological time scales and processes. He also explores the evolutionary mechanisms of plant adaptation to their environment, taking into consideration aspects such as different climatic conditions and resistance against parasites (bacteria, fungi, insects). The primary focus of his research is the study of plant-parasite coevolution and long-term seed dormancy in the soil. To study empirically the genes involved in these adaptations, the wild tomato species Solanum chilense endemic to South America is used as a model system. Aurélien studied agronomy, plant biology, genetics and statistics at ENITA 1999-2002 (Bordeaux, France) and population genetics at INAPG 2002-2003 (Paris, France). After having obtained his doctorate at the John Innes Centre (Norwich, UK) under the supervision of James KM Brown in 2007, he has spent five years as a postdoctoral research fellow at LMU Munich (in the group of Wolfgang Stephan) supported by a grant from the Volkswagen Foundation and the German Research Foundation, DFG.

We kindly urge all participants to mute themselves and turn off their cameras when they join the meeting.

NB: Presentations are 50 minutes long after which the speaker would respond to questions from participants. Participants can ask their questions by any or a combination of the following:

1. By typing their questions in the chat box.

2. By writing “I have a question(s)” in the chat box.3. Raising hands by clicking on the raise hand symbol.
The coordinator would then read out the questions to the presenter or ask the participant to ask his/her question(s).
With the permission of the speaker, we may also record the talk for later distribution upon request.