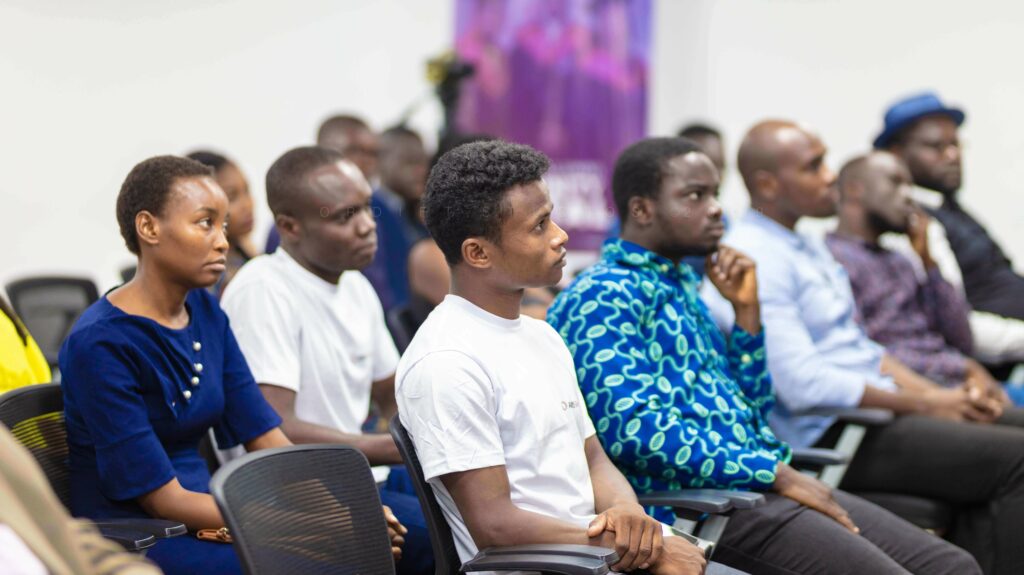 The Research Centre at the African Institute for Mathematical Sciences Ghana (AIMS Ghana) hosted the 3rd Edition of the Stochastic and Applications, Research and Training (START) workshop scheduled from February 17 to 21, 2020 at AIMS Ghana in Accra. The workshop focused on stochastic optimal control in both discrete and continuous time.

Developed to increase cooperation among researchers and research institutions, the workshop, organized with the support of the Alexander von Humboldt Foundation and the German Ministry of Education and Research, brought together renowned international and national scientific researchers, as well as young researchers and graduate students working on disciplines related to probability theory, financial and actuarial mathematics, insurance, mathematics, statistics, and economics. START included two mini courses, research talks and poster presentations.

Thanks to the support of the Alexander von Humboldt Foundation, the German Minister of Education and Research, and AIMS Ghana, there are no registration fees for students and faculty members.

The aim of this course is to provide an introduction to continuous-time stochastic optimal control problems and to study an application to dynamic portfolio optimization financial markets. First we will review some underlying tools from stochastic calculus such as continuous-time stochastic processes, martingales, stochastic integration, Itô’s formula, stochastic differential equations and Dynkin’s formula. Based on these concepts we will then formulate a general stochastic optimal control problem which we will solve using the dynamic programming approach. Finally, we solve a specific portfolio selection problem for a utility maximizing investor.

In these lectures we establish the theory for general state and action spaces and at the same time show its application by means of numerous examples, mostly taken from the fields of finance and operations research.

We cover problems with finite and infinite horizon, as well as stopping problems. The lecture is based on the book “Markov Decision Processes with Applications” jointly written with Ulrich Rieder.

Nicole Bäuerle is a Full Professor in Probability at the Karlsruhe Institute of Technology in Germany. Prior to this, she was Professor for Insurance Mathematics at the University of Hannover and she received her PhD in Mathematics from the University of Ulm. Up to now she has supervised more than 100 Master thesis and 13 PhD thesis.

She is editor of SIAM Journal on Control and Optimization, the Applied Probability Journals and Statistics and Risk Modeling. Her research interests lie in Stochastic processes and optimal control, Markov Decision Processes, stochastic orderings and applications in finance, insurance and energy.

Title: An optimal reinsurance management and dividend payout strategy when the insurer’s reserve is an Itô-Lévy process

We consider the problem of an insurer who decides to allocate a proportion (1 – a(t)) of premiums to a re-insurance company (thereby retaining a proportion a(t) of premiums). The insurer also has to pay dividends c(t) at any time t to shareholders. If the insurer’s reserve is x(t) given by the modified Cramèr-Lundberg model that allows for jumps, we solve a dual optimal policy of a dividend payout scheme for shareholders with constant relative risk aversion (CRRA) preferences and retention level of received premiums for the insurance company. We set the problem as a stochastic control problem and solve the resulting HJB equation . We find that the optimal risk level and dividend payout can never depend on time and that they are directly proportional to the reserve process.

Professor Sure Mataramvura, is an Associate Professor in the Department of Actuarial Science at the University of Cape Town in South Africa.

He is also the current Deputy Dean of Research and Internationalization in the Commerce Faculty.

With a Ph.D in Mathematics of Finance, his main research interests focuses on risk minimization, Mathematics of insurance and general topics of applications of stochastic calculus to finance which include derivative pricing and hedging.

Some models and optimization methods for decision support allow to define strategies of production, management of stocks and exploitation. The proposed methodology mixed optimal control techniques and combinatorial optimization, and help producers and policymakers to increase the long-term production and logistics of the cashew nut sector in Senegal. We propose a methodology to solve the revenue, investment and exploitation issues of the cashew nut sector in Senegal. The stakes are immense: (i) optimal stock planning (ii) optimal production planning (iii) investment reorganization (iv) exploitation of exhaustible natural resources. Numerical simulations on real data in Casamance show the performance of the approach.

Babacar’s research focuses on Global optimization – Theory, algorithms and applications (via cutting plane, Branch&Bound, DC (Difference of Convex functions) Programming, DCA (DC Algorithm), Senegaulois algorithm & local search algorithms). In 2010, his team proposed a new way to study linear programming which is a major tool in optimization. They gave a proposal of algorithm to solve linear programming problem in quadratic time from a basic idea which allow to obtain an approached solution with desired accuracy. In 2015, his research team was recognized for the Data Crossing Prize (Using mobile phone data for Spatial Planning simulation and Optimization Technologies (SPOT)) during the D4D Big data challenge.

This lectures concern reflected backward stochastic differential equations driven by non-homogenous Markov pure jump processes with absolutely continuous compensators. Our approach is based on Snell envelope and specific properties of pure jump processes with respect to the canonical filtration completed and regularized. We solve some specific variational inequalities with nonlocal term.

U of Yaounde I, Cameroon

We propose here an approach in order to estimate parameters of CIR model with jumps in the case where the distribution of jump amplitude belongs to the quadratic exponential family. In fact the distribution of the jump can be different from one phenomenon to another one. Therefore, it is of particular interest to explore different cases in the view of getting the most appropriate and suitable one. The method of estimation we propose here is based on the approximation of the closed form of transition density. Since the CIR does not have an explicit solution, it is approximated by the second order Milstein scheme in order to have a more accurate approximation. Simulations are performed and allow to observe that when the distribution of the jump amplitude is either Poisson or Normal, results of estimation are closer to the characteristics of the initial process compared to other distributions. An empirical example indicates the appropriateness of the estimation procedure used compared to existing methods.

Patrice Takam Soh is a senior lecturer at the University of Yaoundé I (Department of Mathematics) where he has been teaching Probability and Statistics for almost 10 years. In the field of research, he made his first steps in statistical modelling of cocoa pod rot disease (during his Ph.D thesis). Then he worked for several years on the asymptotic properties of GARCH models (in theoretical econometrics). For the last 03 years, he has been working on dynamic modelling in deterministic (SIR type models) and stochastic (CIR with jumps). It should be noted that in these models, Patrice is interested either in the numerical approximation of the solutions or, more importantly, in the estimation of the parameters in these models.

Check the timetable and the daily programme for the event here.