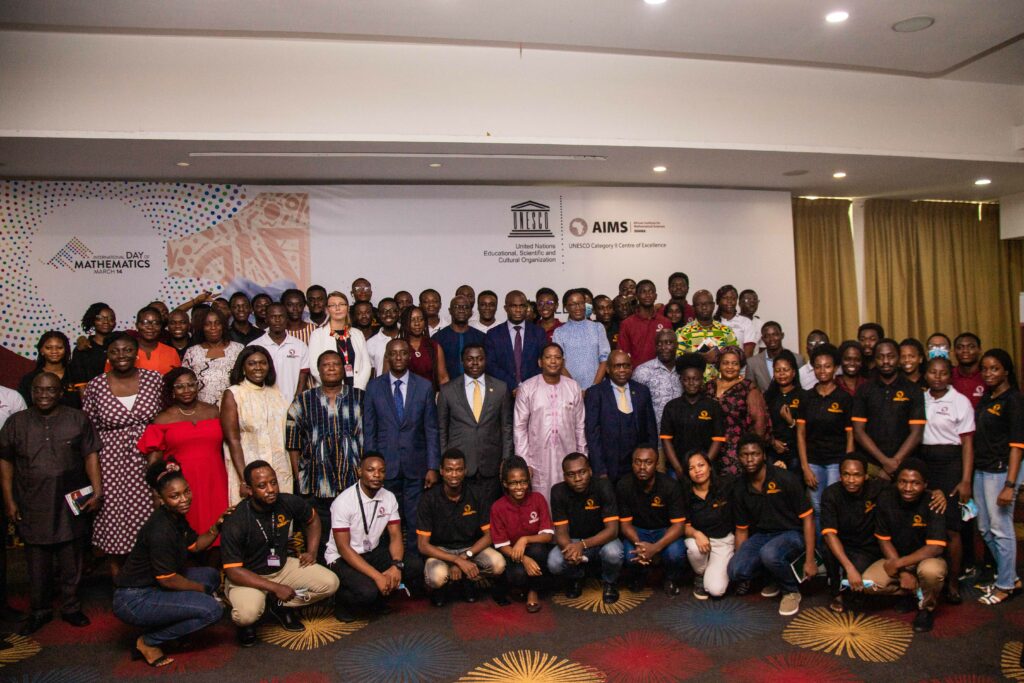 Leading the nation to commemorate the widely celebrated International Day of Mathematics (IDM) also known as Pi Day, the African Institute for Mathematical Sciences Ghana, launched its 10th anniversary celebrations on the 14th of March 2022.

The Chief Operations Officer for the Centre, Ms. Adelaide Asante, welcomed all dignitaries from partner institutions, ministries & industry who had converged to support in discussions surrounding Mathematics and its Applications in Africa. According to Ms. Asante, the theme for the IDM celebration, “Mathematics Unites” was befitting especially because, after a decade of making impact and bringing students together from diverse backgrounds to contribute to scientific excellence in the Mathematical Sciences, the Centre had undergone massive transformation recording many milestones. Notable among them was AIMS Ghana’s rise to the position of a UNESCO Category II Centre of Excellence which in the year 2018.

Dr. Prince Koree Osei, Centre President of AIMS Ghana, stated that since its inception in 2012 AIMS Ghana had graduated over 400 students from 27 African countries, 33 per cent of whom were females. The Pan- African Institute, he said, had built a research capacity for Africans in Pure and Applied Mathematics, and remained an icon in contributing to scientific transformation in both academia and industry. He also stressed that the programmes were in line with the core objectives of UNESCO Category II Centre of Excellence and AIMS Global Network.

As part of new developments, he mentioned that AIMS Ghana and the University of Energy and Natural Resources (UENR), in June 2021 had signed a Memorandum of Understanding towards the implementation of the Climate Change and Atmospheric Physics Programme. Dr. Osei further added that the Centre had introduced a Masters in Mathematical Sciences for Teachers programme on applications and models which would help the mathematics teachers to be innovative and creative in engaging students for better comprehension.

After the premiering of “WAJENZI”, a movie featuring three alumni of AIMS on Mathematics and its Applications in Africa, the keynote speaker Hon. Rev. John Ntim Fodjor – Deputy Minister for Education, buttressed the AIMS mission and emphasized that the Government’s priority in STEM education was part of Ghana’s reform project to reposition the educational system to equip learners with the 21st-century skills to be fit for purpose. He stated that Hon. Dr Yaw Osei Adutwum – Minister or Education, stressed that Science, Technology, Engineering and Mathematics (STEM) especially Mathematics, was the bedrock of the socio-economic transformation of an economy, for that reason there was the need to promote STEM education thus increasing the Science to Humanities ratio from the current 40:60 to 60:40. The STEM agenda is also to prepare the critical mass of empowered Ghanaians for socio-economic transformation and become active participants in the 4th Industrial Revolution.

He further included that the Government had allocated land for the construction of a Girls STEM Senior High School (SHS) in Kpone-Katamanso, Accra to be affiliated with AIMS Ghana. The 12.6 acres of land was to be used for the construction of a world-class campus for AIMS to nurture Ghana and Africa’s talented female students from SHS to tertiary in STEM-related fields of study. The project, the Minister said, was part of the 11-model state-of-the art STEM SHS’ being built across the country to be equipped with 12 laboratories and a STEM pathway.

Launching the 10th anniversary celebrations, the Hon. Rev. Ntim Fordjour went on to congratulate AIMS Ghana for its achievements over the 10-year period, after which the 10th anniversary logo was unveiled. As part of the year-long celebration, there was to be an Alumni Homecoming and a Public Lecture in honour of the patron/founder of the Centre – the late Professor Francis K. Allotey.

Being a collaborative effort between UNESCO and the Ministry of Education, Mr Abdourahamane Diallo, Head, UNESCO Office, Ghana in his address said that the study of Mathematics was essential in achieving the Sustainable Development Goals because it empowered people and opened up new opportunities. Bringing the greetings of Ms. Audrey Azoulay, Director General for UNESCO, he lauded AIMS Ghana for its attainment of the UNESCO Category II Status and expressed profound interest in the upcoming activities of the Centre, adding that he was committed to supporting the country’s educational system for sustained development.