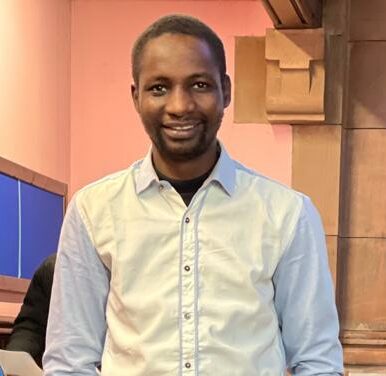 Ijuptil belongs to the AIMS Ghana Class of 2021. He is currently a PhD researcher at the School of Mathematics and Statistics, University of Glasgow, Scotland, UK. His research interests include modelling real-world problems focusing on anisotropic passive and active fluids. Considerable research has already been carried out on traditional Liquid Crystal Displays (LCDs). In recent years, liquid crystals have started to be used as sensor displays (force sensors, light or chemical sensors), and the theory of these applications began to be studied. The application of active liquid crystals in designing sensors is also an interesting possible application because small changes in alignment or forces could cause huge effects (like flow) in the active system. Active nematics are systems composed of self-driven units that consume and convert energy into directed motion. Their unusual behaviours and flow generation have opened an exciting area of research in recent years. On this basis, his study focuses on the mathematical modeling of active nematics using an adapted version of the continuum theory of nematics. His work aims to obtain a deeper understanding of active nematics, which may provide insight into possible future devices involving active nematics.

Additionally, he engages in other projects on mathematical modelling of infectious diseases and the theory of general relativity.

His experience at the AIMS has led him to consider how he can contribute to the educational sector in Africa. As a result, he founded a Facebook Platform called ScholarshipDreamers: ScholarshipsDreamers is a platform created to aid all those pursuing scholarships at all levels. This platform allows him to help academic enthusiasts achieve their goals by winning competitive scholarships.