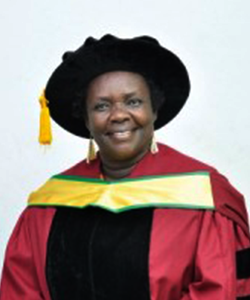 Prof. Mrs. Esi Awuah is a distinguished academic and administrator. She is a full professor of Environmental Health and Sanitation at Kwame Nkrumah University of Science and Technology (KNUST). She is a global advisor for African Sanitation Think Tank and Executive Board Member of OSWD for the African Region.

Prof. Mrs. Esi Awuah has a considerable University managerial and administrative experience. She is the former and foundation Vice-Chancellor of University of Energy and Natural Resources; Head of Departments; Centre of Environment and Technology and Civil Engineering, at KNUST 2004 -2006, 2006-2008 respectively; Dean, Faculty of Civil and Geomatics Engineering 2008-2010 and Director of African SNOWS Wellcome Trust Funded Project -2010 to 2012.

She received the UNESCO Mondialogo Award in 2007 for innovative research in engineering. In 2016, Prof. Mrs. Esi Awuah received the Ghana’s prestigious award, the Order of Volta, for her contribution to education and national development. She also received the Golden Edinkra State Award from Sumanman for Education in 2015.